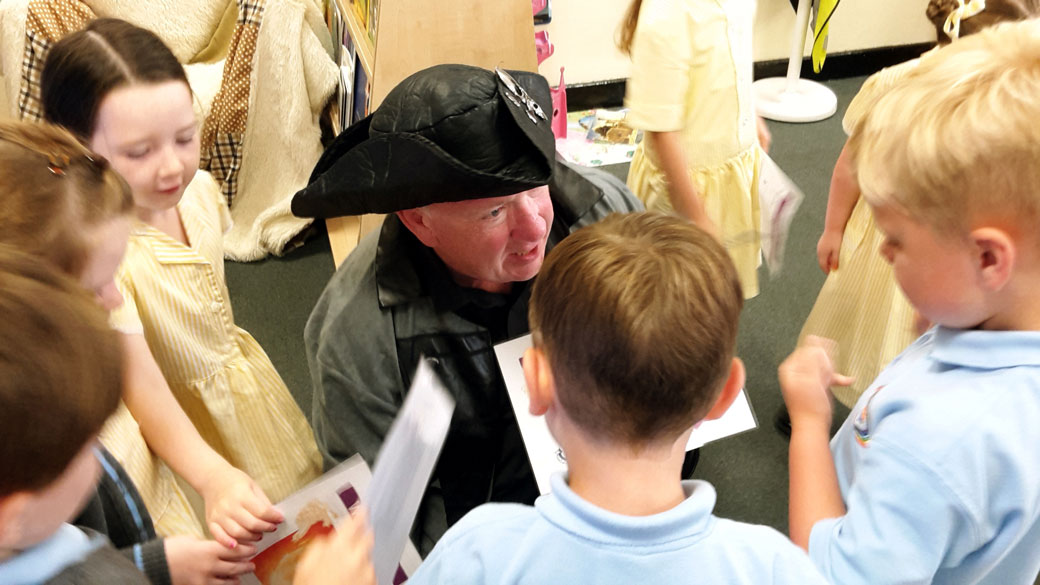 Specially developed for large (three or four-form entry) schools wanting all their pupils to enjoy a shared maths experience in a single day, The Captain’s Conundrum creates a genuine “buzz” about maths – because it’s not every day you’ll have a real, live pirate in school. And in the school year 2016/17 alone, more than 10,000 children up and down the country enjoyed The Captain’s Conundrum!

The day starts with a bang, as Captain Morgan makes a surprise appearance at an assembly (it’s probably best to warn your colleagues about this!) to explain his plight. The Captain has bought a map of Cloud Island from Old Billy Bones – together with clues that should lead him to vast hoards of treasure. But Bones, the scallywag, has made sure that the clues are just to hard for one person alone to crack! Which is where the children come in …

It may be, of course, that you don’t have a space big enough to accommodate all the children in a single assembly. But the Captain has thought about that (good pirates always plan ahead). So, as was the case with Penwortham Primary (London), he’ll put together a timetable to meet your needs.

Once the assembly is over (and the good Captain has answered some of the pupils’ questions about the life of a pirate), each year group returns to the hall to discover exactly what is required of them. Before that, though, they’ll have to pass Captain Morgan’s Problem-Solving Challenge. If they do, they’ll be rewarded with maps and a set of age-differentiated clues. And if they don’t … Well, the menace of the plank always beckons!

Each set of clues should, if all goes well, reveal the location of one part of Billy Bones’ Booty. So while pupils in Year 1 will have to show their understanding of positional language to find the Silver Coins, those in Year 3 will have to demonstrate their skills with fractions to uncover the Rubies – and ear 5 children will have to know how codes work to discover exactly where Captain Cutlass’s Silver Sword is buried. The Year 6 Challenge is particularly fiendish – as both pupils and teachers at Hale School (Surrey) can confirm – but they got there in the end!

Reception children are given a special task – asking them to use their understanding of number to help the Captain keep his loot safe, once he’s found it all. And, if timetables, allow, Captain Morgan is always happy to pop into Nursery, too (which was greatly appreciated at Crowlands Primary, in Essex).

The Captain realises that teachers often like to both view Challenges in advance and have the opportunity to present them visually as well as verbally. So he'll make sure he sends you, in advance, a PowerPoint containing them all. These mustn't be shared with the children before he gives the "Aye, Aye" of course - otherwise you might find yourself food for the fishes!

At the end of the day, the pupils gather for an assembly (or two) once again, during which representatives from each class join Captain Morgan at the front of the hall to share their findings. And the rest of the school are asked for their help once again as they help put together a Shopping List for his Expedition - one designed to help him overcome the many different problems he's going to encounter in collecting all the treasure. He'll need the help of a Memory Expert or two to help him keep track of things (and will demonstrate a great way of remembering facts). There are always a lot of willing volunteers for this role - and those at X showed they had the memories of elephants!

The Captain knows that teachers will want to keep the "buzz" generated by his visit to continue - so you'll be sent his Top Tips for Cross-Curricular Follow-Ups. And he also understands that the children will want to know if their help leads to the treasure. So, once his journey is complete, he'll also send you a letter detailing his adventures - to be shared across the school.

"The children (and staff) were absolutely captivated by Captain Morgan! The challenges were challenging but accessible to all; it was really well thought out and the whole day was time to perfection!" (Class Teacher, Chris Church Pellon)

To find out more or to book a Creative Maths workshop please contact us on 0151 708 8886, or email info@as-creatives.com.